A Meeting on the Road

Posted on February 7, 2012 by metonymicalpen

Look down from these tranquil heights of Jebel Osha, above the noiseful, squalid little city of Es Salt, and you see what Moses saw when he climbed Mount Pisgah and looked upon the Promised Land which he was never to enter.

I bought a book to break.

I went out looking for a tome to deconstruct, rearrange, paint over, cut apart, fold, rip, glue—it was to be a public domain, literary cadaver. Preferably something old and yellow, because I love the smell of dust mites.

Last summer, under the tutelage of Rebecca Brown, I learned how much fun it is to ruin a page of prose by turning it into something else. A whole stack of in-process desconstructions now hold down the floor next to my computer table. I’ve been working my way through Pride & Prejudice with poems about the art life, writing, creating, and doubting. I’m also de-wording a tattered copy of Fellowship of the Ring with nature haiku and gouache.

So it was with great pleasure that in our local Friends of the Library spider web stacks, I came across the un-creasedthough somewhat faded spine of Out-of-Doors in the Holy 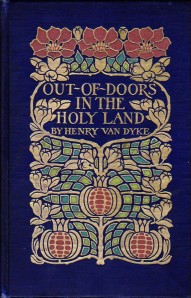 Land, by Henry Van Dyke. The publication date is 1908 but the paper isn’t even yellowed. I don’t think the book had been opened since it was inscribed as a gift 103 Christmases ago. The plates are still bright and hold their crisp, inky detail and raglan striations. The plate tissues are smooth and misty white. And then there is Van Dyke’s prose:

Yes, here are my friends, in garden of the hotel, with its purple-flowering vines and Bougainvillea, fragrant orange-trees, drooping palms, and long-tailed cockatoos drowsing on their perches. When people really know each other, an unfamiliar place lends a singular intimacy and joy to the meeting (17-18).

And when coming into Jerusalem:

Out of the medley of our first impressions of Jerusalem one fact emerges like an island from the sea: it is a city that is lifted up. No river; no harbor; no encircling groves and gardens; a site so lonely and so lofty that it breathes the very spirit of isolation and proud self-reliance (47).

And again later, when traveling cross-country by camel, his group meets a wedding party:

A score of cavaliers in Bedouin dress, with guns and swords, came after us in hot haste.

The leaders dashed across the open space beside the spring, wheeled their foaming horses and dashed back again (236). 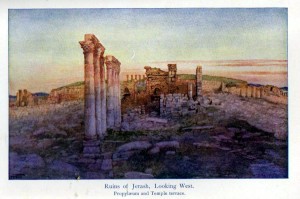 This long gone view of place and people begins with the question, “Who would not go to Palestine?” The answer goes on to chronicle an ivy-league professor’s travel diary of a trip taken at the turn of the twentieth century in search of a more meaningful connection to his religion, to Jesus of Nazareth as his religious figurehead.

Through soullessly cold temples and poverty stricken cities, where the poor crowded rundown corridors of makeshift hospitals and children died in the streets outside, Van Dyke looked for some kind of spiritual connection to his religious ideals, seemingly oblivious to the luxury and largess granted by life to his quest.

Before I knew what was happening to me, I tripped and fell into his company, found myself astride a horse, galloping away from the blighted urban coast, ready to ride a camel through rougher and roadless country.

We ate dust and dodged bandits on the road from Bethlehem, and as we drew nearer to Hebron, we laughed together at the way a camel’s load never looks quite as large as a donkey’s, but the camel always seems more displeased with its work, the droop of its lower lip expressing an unalterable disgust with the universe.

I myself bartered with water sellers, trading off my best garments of macintosh for the day’s drink. We hadn’t yet learned to conserve when we left Jaffa. 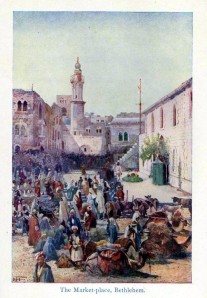 I thought Van Dyke, although by now I was calling him Henry, should have taken some time out to interview our various guides and I argued this point, but he was too consumed with worry that he would not find his spiritual boon to see the opportunity he was missing.

In the end, after months at travel, what Henry Van Dyke realized, what he encouraged his fellows to try and grasp, was that his object of obsession, his son of god, was a person, a child whose mother dragged him to weddings, a youth who ate brined olives and sat on a rock wall listening to neighbors gossip, a man who saw with eyes full of afternoon sun the ill will of camels and the patience of donkeys.

The physicality of this image electrified him. After the emptiness of missions and churches, altars and ceremonies, sitting under an orange tree in a desert garden made this prosy 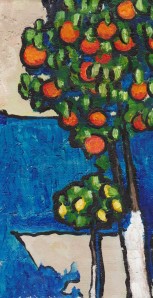 professor realize that he was worshipping a man, a creature of flesh who was subject to the comforts and hostilities of heat and sudden rain, sweat, hunger, humor, and fatigue. ForHenry, this made the ideological Jesus he had looked for a moot and mythological phantom and thus vitalized his view of the potential for divine manifestation in real, callous-handed humanity. He stood shaking and awake on the threshold of the idea that he was not separate from the perfection he saw in Jesus, the person.

But then, in the book’s summation, he began once more to apologize to the idea that it’s all real, it’s all real, we couldn’t have made it up. In the turn of a single, still un-yellowed page, he lost the relationship he’d gone to Palestine to find. His grasp on the textural quality of his new faith in the divinity of reality fizzled as he retreated to ideology where I have to assume he stayed. I don’t know because I left him, hunched over his desk, trying to vet the heretical from his final speech.

I was disappointed to get all the way across the open desert to the mountains of Samaria and then be asked to turn around and go backward, out of song, into litany. But I understand, too. What we can imagine as divine is so dependent on the paradigms of our origins. Transcendence, then, is dependent on the cultivation of the ability to create within those paradigms and to continue to abide and evolve with that living creation without retreat. This idea might explain why, for me but not just for me, art and awe are so engaged with one another.

So, I took Henry’s diary, which by now is my private property, and put it on a shelf to live out its time with me in the printed peace of its compromise, and, not unironically, the physical beauty of its art deco gilding and color plates—its reality. Weak for the language, still eager to engage the old traveler in disassembling dialogue, I ordered a second, later copy of the same book (for $2.00, because value is subjective) so that I can cut Henry up and preserve him, too.

While I wait for Henry’s second coming in the mail, I have turned my intent to cut something up on a little book of popular poetry published in 1923. I picked it up for virtually nothing not long before the travelogue by my new friend and figured it would be a fun exercise in mini-mini deconstruction.

So here it is in my hand, exactly palm-sized in its blue-rubbed-grey cloth cover, Poetry: Elegies and Hymns, a different book entirely, edited by Henry Van Dyke. I have to laugh at the creative energy of a trend. 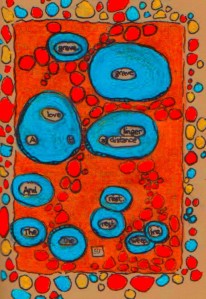 I earned an M.F.A. from Goddard College in 2013. Since then, my work has received the 2013 Beacon Street Prize in Short Fiction and the 2014 John Steinbeck Short Fiction Award. My stories have appeared in REED, reDivider, The Concho River Review, Sou'wester, Moon City Review, and elsewhere. Currently, I live in the desert with my family , but I am trying to move us closer to water. We need an ocean to float all of our ideas.
View all posts by metonymicalpen →
This entry was posted in Uncategorized and tagged artists, bibliomania, creativity, erasure, Henry Van Dyke, old books, Palestine, paradigm, religion, spirituality. Bookmark the permalink.

2 Responses to A Meeting on the Road